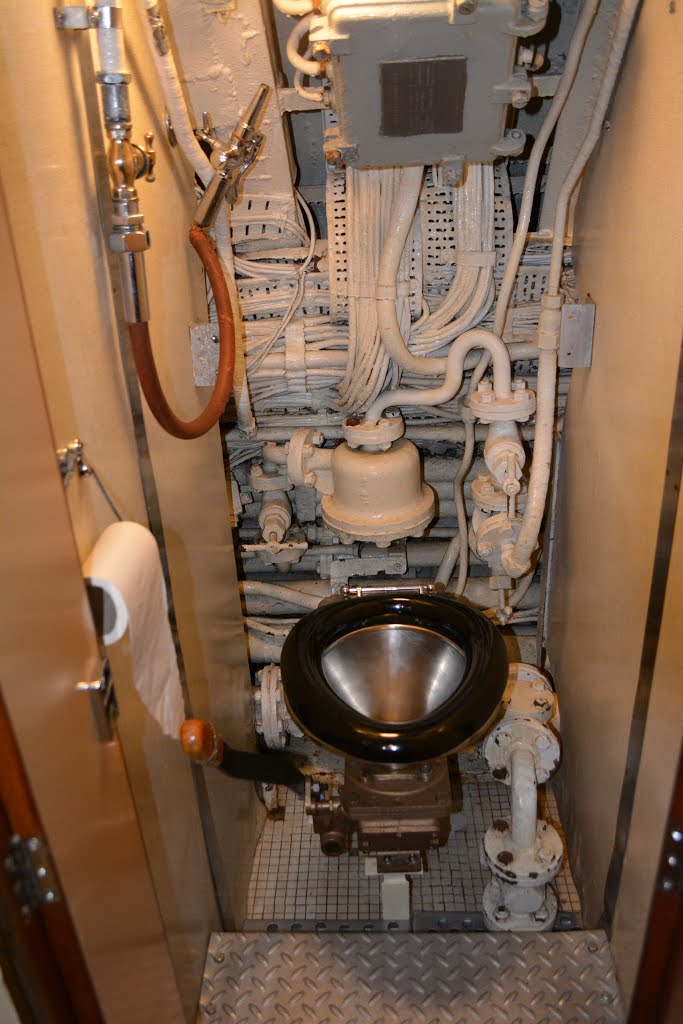 The following edited extract is taken from ‘On Her Majesty’s Nuclear Service‘ by Eric Thompson, and will be published in February.

The submarine I was serving in, Oracle, had some severe biological problems. Her heads (toilets) were blocked and seventy desperate men were dealing with corporate constipation. In modern society, we have become disconnected from our personal waste. Like inner city children who think milk comes from supermarkets with no concept of cow involvement, we sense no connection between our personal products and the sanitary oblivion of the local sewage works. This cannot be said of submariners. For them, sewage disposal is a major priority. In their infancy, submarines relied on the bucket-and-chuck-it method, which necessitated surfacing. As that was too risky in time of war, the single man sanitary installation was introduced. Consisting of a reinforced lavatory pan with a bolt down lid and a high-pressure air bottle, it was essentially an underwater crapshooter. When a man’s offering was safely bolted down, he would open the seacock followed by the air valve and whoompata, his offering would be fired into the deep blue yonder.

To render the installation ready for the next user, the man would then have to de-pressurise the pan and re-open the lid, a high-risk operation for if he got it wrong, he got his own back. Oracle actually had the luxury of a sewage tank but its contents had still to be blown overboard every other day using high-pressure air. When the pressurised air in the emptied tank was then vented inboard, the whole submarine had to endure what can only be described as a corporate fart, an odour most foul that persisted until filtered-out by seventy pairs of human lungs.

In time of war, an alert and inquisitive enemy might wonder at the source of human faeces popping up from the deep or even just an unexplained brown patch in the ocean. He may even be moved to drop a clutch of depth charges on the spot to satisfy his curiosity. Thus, one badly timed excretion could prove fatal for the submarine. Sewage control is a significant military factor and the human bowel is at its most active in the heat of battle. A spy hiding in a cupboard, for example, dare not reveal his presence with a smelly indiscretion. In submarines, the discharge of sewage is a Command decision.

The uninformed citizen may imagine that men in submarines worry about sinking or the morality of launching nuclear weapons. Nothing could be further from the truth. Their main concerns are food, sewage and movies. Consider the case of a submarine with a crew of one hundred and twenty men. The design calculation would assume one daily bowel movement per capita. If each man were to be credited with a British Standard three-pounder plus a bucket of flushing water, the sewage tank would be filled in two days. Tank contents would then have to be discharged through the sewage overboard hull valve, in biological terms the submarine’s anal orifice. Were this to become blocked, the immediate consequence would be the aforementioned corporate constipation.

In Oracle’s case, the blockage could not be removed and the desperate but ingenious crew had resorted to the use of waste paper baskets as impromptu lavatory pans, with large brown ‘On Her Majesty’s Service’ envelopes being used to catch the product. These were then delivered by hand to a large biodegradable underwater bin bag that was fired from the Gash Gun, a small downward pointing torpedo tube. It is small
wonder that submarines are known in the trade as sewage tubes.

Dear Reader, next time you lock yourself in the wee room underneath the stairs, count your blessings. It is most unlikely that a passing aircraft will bomb you; it is equally improbable that the public sewage system will backfire on you; and it is inconceivable that if your cistern overflows, your house will fill with water and sink.

So spare a thought for the poor, bloody submariners.