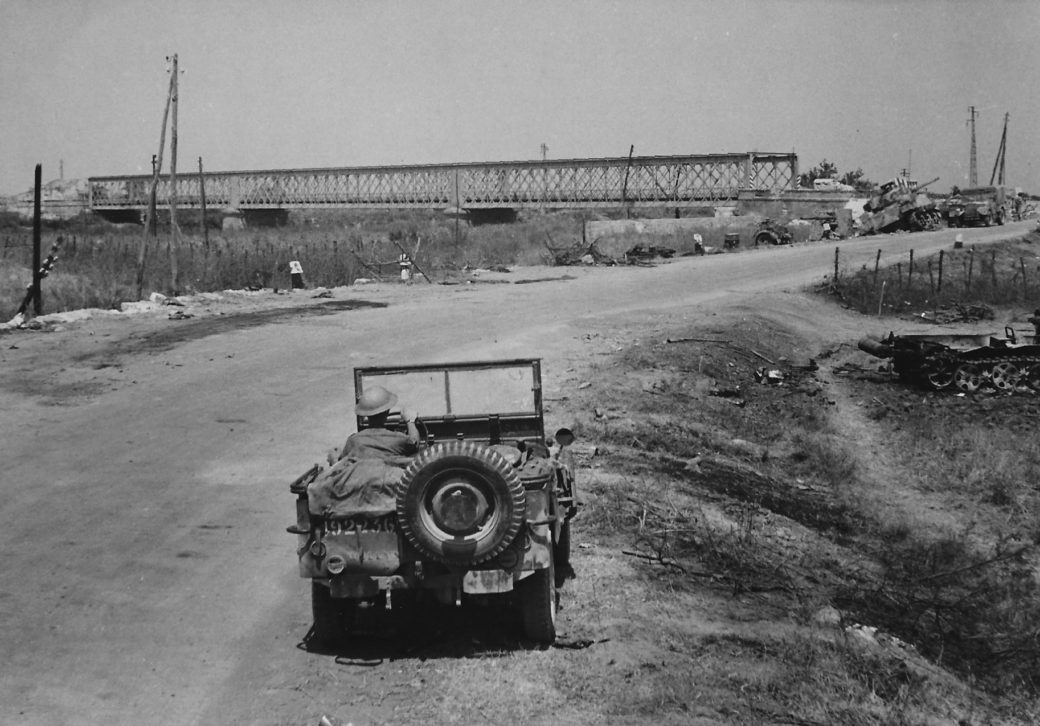 The following blog is written by Mark Saliger, the author of The First Bridge Too Far about one of the most significant British airborne battles of World War Two. The book will be released in July to coincide with the battle’s 75th anniversary.

Fresh from fighting in the deserts of North Africa, gaining two Battle Honours as well as their nickname of the ’Red Devils’ in the process, the British 1st Parachute Brigade were now encamped in Tunisia and waiting to play their part in the next step of the reconquest of Hitler’s Fortress Europe.

The Allied leaders had decided to open up the much-awaited Second Front to relieve the pressure on the Russian Front, knock Italy out of the war and push towards the borders of the Nazi Reich. The ‘Stepping Stone to Italy’ would therefore be the invasion of Sicily, carried out under the code name Operation HUSKY.

As the battle-hardened Paras prepared for battle once again, they needed to amalgamate new recruits into the experienced ranks to back-fill losses from the North African fighting. As they trained in the desert, HUSKY was let off the leash.

Both the British and Americans used airborne forces to support the invasion. However, both air armadas were heavily fired on by their own navies as they approached the Sicilian coastline, causing mass casualties amongst the glider-borne and airborne troops and questioning their future use on the battlefield. As the land forces pushed northwards across Sicily, they again needed to capture a strategically important bridge, the last bridge before the prize of Messina, the Primosole Bridge. This would allow the Allies to push onto Messina and cut the link to Italy, effectively sealing off the island and securing it from the Axis forces.

The German had also recognised the strategic importance of the bridge and swiftly flew in the elite Fallschirmjaeger, Germany’s battle-hardened paratroopers, only hours before their British counterparts were due to parachute to capture the exact same prize. It would be the first time in history that two opposing enemies had parachuted into battle to face each other.

As the Paras approached the Sicilian coastline they too came under friendly fire once again and scattered the air armada and their cargo of paratroopers over a vast area, including as far north as the slopes of the volcano, Mount Etna.

On the ground, in the darkness, small groups of Paras now formed up into their own ad hoc patrols and made their way to the objective, whilst the supporting gliders began to land with their artillery.

As they made their way through the Mediterranean night, the Paras managed to overcome the Italian garrisons at the bridge and on the supporting hilltops in only a matter of a few short sharp minutes of ‘airborne aggression’.

With the break of dawn, the paras settled down for a tough day’s fighting, now knowing that their jump had gone horribly wrong, with less than a seventh of their strength being around the bridgehead. They also had the knowledge that they were now up against elite German paratroopers, the ‘Green Devils’, rather than Italian conscript troops.

After the taking of the bridge, the Italians and Germans were initially unaware of its sudden capture and continued to attempt to drive over the bridge, twice being ambushed but injuring Brigadier Lathbury, the force commander, with a stray enemy grenade.

The main thrust from the enemy was initially directed at Frost’s 2 Para situated atop the Johnny Hills overlooking the bridge to the south. After beating back numerous infantry assaults from the Fallschirmjaeger, the enemy then resorted to bottle the Paras up on the hill with heavy artillery and machine gun fire before switching their attention to the bridge itself.

At high noon, when ground forces were due to relieve the Paras, the Fallschirmjaeger struck. Driving southwards from Catania, a convoy of German Fallschirmjaeger debussed from lorries and began to spread out into the fields to from up for an advance to contact with the bridge defenders. The Paras had seen them coming though. With the few support weapons that had arrived at the bridgehead, they waited for the Germans to patrol towards them and then let loose with a lethal barrage of lead towards the enemy, sending them hurrying back to Catania for reinforcements.

The Germans returned mid-afternoon after press-ganging all available men, including chefs and drivers, into the fight. Once again, the Germans approached from the north, backed-up by artillery and air support this time. The Paras held frim despite their lack of numbers and dwindling ammunition. Each German attack slowly made ground though until 1 Para’s Commanding Officer, the legendary Alastair Pearson, made the decision to tactically withdraw to the south end of the bridge in order to continue to deny the bridge to the Germans. As more and more fresh German troops poured into the fight, together with more artillery and tanks in support, they slowly began to blast the Paras from across the river, as the Paras began to run out of ammunition. The decision was made by Lathbury to withdraw from the bridgehead towards the Johnny hills as night fell, giving up the bridge but installing themselves on the tactically important Johnny hills which would still deny use of the bridge to the Germans through covering fire.

As the remnants of the 1st Parachute Brigade linked back up with the battered 2 Para on top of the Johnny Hills, the leading elements of the ground forces finally arrived 12 hours late and decided to attack the bridge at first light. This gave the Fallschirmjaeger time to dig-in and await the Durham Light Infantry’s morning assault. They were allowed to move up to the bridge and then were cut down by machine gun fire. Later that night, Pearson led the DLI over a fording point upstream and allowed the DLI to move towards the bridge and assault it at first light, finally capturing it after a hard day’s fighting.

The Primosole Bridge had been captured by the 1st Parachute Brigade but against overwhelming odds it couldn’t be held. The delay of reinforcing the Primosole Bridge by ground forces had held up Montgomery’s advance for the entire British force towards Messina. The delay allowed the Germans to further reinforce their defensive lines in front of the British. This allowed Patton’s American Army to make their way across Sicily with lighter opposition, eventually taking Messina hours before the leading British elements entered the city. It was a piece of theatre which created tensions between the two senior Allied commanders for the remainder of the war.

As the weary survivors of the 1st Parachute Brigade sailed back to North Africa to recuperate after their efforts in Sicily, they were prepared for their next major operation – the capture of the bridge at Arnhem during Operation MARKET GARDEN. Lessons that they had learned the hard way in Sicily, were taken onboard, and some were not, leading to them once again fighting for a bridge too far, only months after fighting for the first bridge too far.